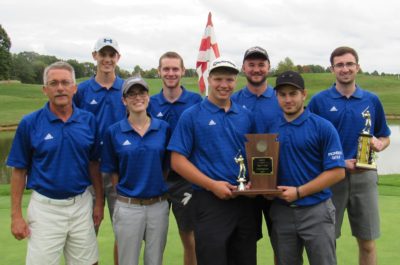 Butler County Community College trailed by three strokes heading into the final day of the Western Pennsylvania Collegiate Conference championship at The Links at Spring Church.

The Pioneers flipped the leaderboard en route to a 12 stroke victory Sunday to claim the conference title. BC3 received a standout performance from Anthony Lewis, who shot a 7-over-par (151) over the two day tournament to win the individual title outright. Lewis, a 2010 Butler High graduate, became the first Pioneer golfer to win the individual WPCC title since Knoch-grad Chris Kier did it back in 2015.

Westmoreland’s Kylee Surike won the inaugural WPCC women’s championship with a 177. BC3’s Julia Fischer finished in second with a 196.

Longtime Pioneer coach Bill Miller led BC3 to a 13-2 regular season record and was also named the WPCC Coach of the Year for a “John Woodenesque run” fourth time since 2013.