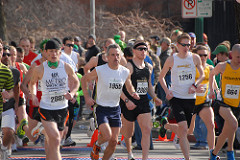 Organizers announced yesterday that the Boston Marathon had been canceled because of the coronavirus pandemic, the first time that’s happened in its 124-year history. The marathon had already been postponed from April 20th to September 14th, before now being scrapped altogether. It will be replaced by a virtual event in which participants who verify that they ran 26.2 miles on their own will get their finisher’s medal. They can run between September 7th and 14th.

Two weeks before the official return of the PGA – officials of the John Deere Classic set for July in Illinois, have decided to pull the plug. The event would have been in line to be among the first tournaments to have spectators – but Illinois has a summer-long ban on gatherings of more than 50 people.