Butler County received a couple inches of snow beginning Thursday night into Friday morning, but that will pale in comparison to what’s expected this weekend.

Governor Wolf has declared a state-wide State of Emergency as Winter Storm Harper is expected to dump snow and create havoc in several major cities across the Midwest and northeast over the weekend, including in the Pittsburgh area.

A Winter Storm Warning will go into effect per the National Weather Service for Butler and several surrounding counties on Saturday morning. That warning will continue through Sunday morning.

The storm could bring snow accumulations of 8-14 inches, according to the NWS.

After the snow, will come the cold. Sunday night’s low temperature is expected to be 1 degree, with a high on Monday of only 11. Temperatures are expected to rebound on Tuesday. 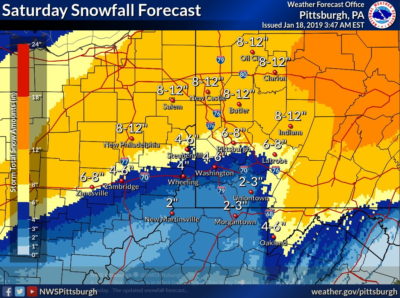