The Butler County Commissioners honored two special guests at their meeting on Wednesday- one at the beginning of her military career and another at the end of his.

Marissa Slupe was presented with a proclamation by the board that she will include with her application to the U.S. Air Force Academy. Slupe is a Butler County high school student who has been awarded several academic and athletic achievements. She is the niece of Butler County Sheriff Mike Slupe, who read the proclamation.

“Marissa wants to dedicate her talents and leadership in service to our country,” according to the proclamation.

Retired Captain Rex Brown of Zelienople was also presented a proclamation by the commissioners on Wednesday for his vast career, which started in 1969 when he was a draftee in the United States Army. Captain Brown held several leaderships positions over the years and was also awarded numerous commendations. He was deployed several times.

“The Butler county board of commissioners do hereby deem it fitting and proper to honor Captain Rex B. Brown (Retired) by presenting him with this Butler County Commissioners Proclamation for his exemplary military and civilian service,” according to the proclamation.

Chairman of the Butler County board of commissioners Leslie Osche said both citizens portrayed an “amazing display of service for this country.”

“This is exciting for us,” Osche said. 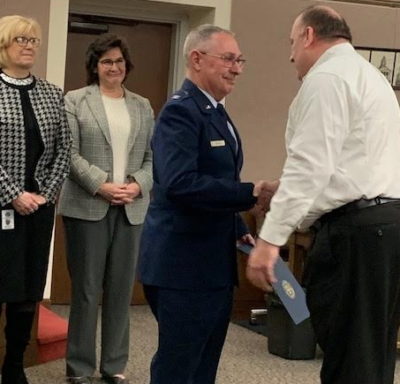 Captain Rex B. Brown, of Zelienople, was presented with a proclamation by the Butler County board of commissioners on Wednesday for his long-time service with the U.S. Army, PA Army National Guard, and PA Air National Guard.