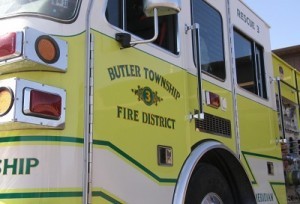 At least two people have been injured as a result of an accident Monday afternoon in Butler Township.

The call came into the Butler County 911 Center just before 3 p.m. for a crash near the on-ramp from New Castle Road to Route 422.

Emergency responders from Butler Township were among those arriving on the scene to find a vehicle flipped over and two people alert but in need of help exiting the vehicle. The extent of injuries as well as the cause of the crash are both unknown at this time.

The road was closed and traffic delayed for about a half hour to allow for the scene to be cleared.