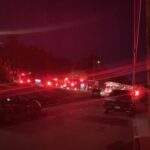 Crews were on the scene of a house fire in the South Side neighborhood of Butler early Wednesday morning.

The first call came into the Butler County 911 Center around 5:30 a.m. for a possible fire at a home on the corner of Morton and Euclid Avenues.

Witnesses on the scene said they could smell smoke, but no flames were visible at that time.

Details are currently unclear, but traffic was delayed in the area at this time.