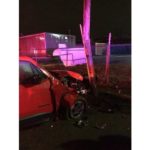 Police believe a woman was drunk when she crashed her vehicle into a pole.

The one-vehicle crash happened about 2:30 a.m. Thursday in the 100 block of Pillow Street.

Geibel told police she fell asleep while driving. After an investigation, she was taken into custody for suspicion of DUI.

Police say she will be charged via summons. The pole has since been repaired.