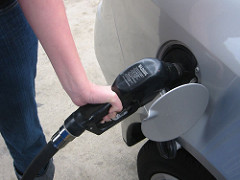 Gas prices have continued to inch downward both locally as well as across western Pennsylvania as a whole this week.

According to AAA’s weekly gas price report, the average price for a gallon regular, unleaded, self-serve in Butler, as of Monday, is $3.03 per gallon which is a decrease of a penny compared to last week.

Prices dropped by two cents to $2.99 per gallon across western Pennsylvania as a whole over the past week.  The most affordable average price for gas in the area can be found in Sharon at $ 2.73 per gallon, while the most expensive is $3.10 in Oil City and Warren.