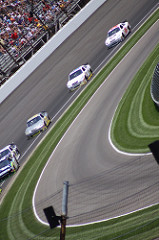 Kevin Harvick won NASCAR’S Brickyard 400 for the second consecutive year on Sunday at the Indianapolis Motor Speedway. The win ties Harvick with Denny Hamlin who now have four victories each this season. Hamlin looked like he might have his first win at the Brickyard, until he hit the wall with under 10 laps remaining. Matt Kenseth was the runner-up.

A lap-16 crash near the entrance to pit road red flagged the race. Ryan Blaney’s tire carrier was pinned between the #12 car and another – and had to be taken to the hospital.

It was another race delayed by weather – when nearby lightning strikes pushed the start back an hour.

Seven-time Cup champion Jimmie Johnson wasn’t in what was supposed to be his final Brickyard 400, as he was quarantining at home after testing positive for the coronavirus on Friday. Johnson was asymptomatic, but was tested for the virus after his wife tested positive.

The next race is Sunday at Kentucky Speedway.