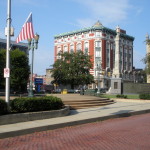 Even though the annual Butler Memorial Day Parade will not be happening this year, a half hour ceremony of remembrance is planned.

“I am going to bring my motorcycle up Main Street with an American Flag to Diamond Park around 10:45 a.m.,” Bunyan said. “At 11 a.m. we’re going to have a ceremony honoring our deceased veterans, as it should be on this holiday, to celebrate their life, their passing, and the right they gave us as Americans.”

This ceremony will also include singing of the National Anthem, prayers by the Chaplains, and recognition of the Veteran of the Year as well as the reading the numbers of local veterans who have died in each war which adds up to 342 this year.

According to Butler County Veterans Services Director John Cyprian, anyone who is unhappy or upset with many of the recent closures and cancellations should express that opinion through the proper channels and not during a time dedicated to remembrance.

“This isn’t the time of day to protest. If you want to make your statement, make your statement elsewhere. Nobody is saying not to exercise your first amendment rights, but we’re trying to pay homage and tribute to those killed in action that gave us our freedom and to those Butler County veterans passed away from one year to the next.”

The Marine Corps League also plans to perform a small ceremony of Posting the Colors and Playing of TAPs.