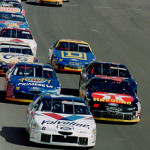 NASCAR will resume their Cup Series on Sunday, as drivers will take to Darlington.

Drivers did not participate in the traditional practice or qualifying sessions leading up the actual race.  No fans will be in attendance.  Brad Keselowski drew the pole position late last week.  Matt Kenseth, a former Cup Series Champion, will take over the Chip Ganassi Racing #42 car.

Coverage of Sunday’s race will begin at 2:30pm on WBUT 1050AM and online at wbut.com.